Skip to content
Over the period of our trip, each team worked with different non-profits. My team, Team Jami’i (community) worked with the Simama Project(Stand). The aim of Simama is to get kids of the streets using a holistic approach. They counsel, house, feed, pay tuition of the kids so that they don’t worry about anything. Below is a review of the work my team did at Simama
What did you propose?
When we got there, our co-ordinator, Regina,  put us to work on digitizing the children’s files, making brochures, and reviewing the year’s activities. We all agreed that this would keep us occupied till the end, and there was no need to add anymore. We also said that if we could finish, we would take on additional projects
What did you complete?
We were able to complete everything that we proposed. We realized that there were too many children’s files, so we created a system for digitizing the files and made sample digital files for the project to continue. We decided to create three brochures: one catered to the children in need and their families, one for donors, and one for volunteers. The one for the children would be translated into Swahili. The year’s activities were reviewed and changes made. 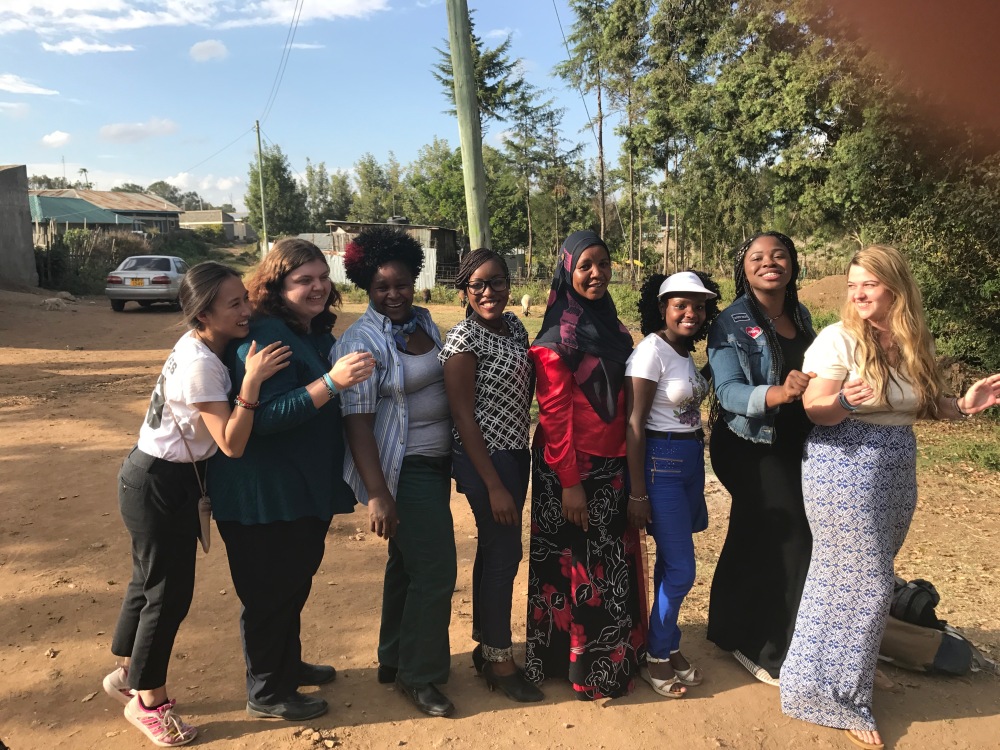 The office ladies!
What obstacles did you face in completing the project?
It was hard to know were to draw the line. I was the logistics person, so I had to be thinking realistically consistently. Especially with the files, we thought we would be able to complete most if not all, but we realized that would be more than we bargained for.
Also, the children got out from school after we already left, making it hard to see them
How did you address those obstacles?
Our teacher had to step in a little bit, and suggest that we finish the files that we were already working on, and make a step by step guide for how we completed the files.
We were also able to schedule some afternoons to go see the children and hang out with them.
Were there obstacles that you could not overcome in doing your project
The project was our priority, so we had to be in the office most days. We had a certain amount of time to stay, and were only able to see the children twice.
What are your ideas for how this project can continue with other volunteers and the site partners?
Volunteers could definitely be useful in completing more digital files because it would take one person way too longer. Also with the distribution of brochures and reaching out to potential donors and children living on the streets. Regina mentioned that in some situations the parents are found and referred to some sort of social service so that they can be more stable and be reunited with their children. I think that is an area that other volunteers can work in.
How did you engage in capacity building with the site partners (connecting with someone on-site to make sure the project continues)?
The children’s brochure needs to be translated into Swahili, so one of site partners is working on that. They are already working on getting the brochures in print and putting it on the website. With this, it makes sure that the work doesn’t end with us. Even without us, the work we have done will be continued.
What did you learn from this project?
I learned to ask for what I need. There would be times when we would need and extension cord, flash drive, passwords, emails, photos, anything and everything, and if we didn’t ask, we would not receive. It was scary at first, but our co-workers created an atmosphere of friendship, so that we never lacked in what we needed to make sure the project was complete.
What did you learn about yourself?
I learnt that I am not too bad with technology. I learnt to step back so that others could step up. With the brochures, we had to do three, and we are four in the group. Everyone else has done something like that, or has an idea of what to do. If I pushed, I would have stopped someone else’s talent from shining. I stepped back and watched others so that I could learn from them.